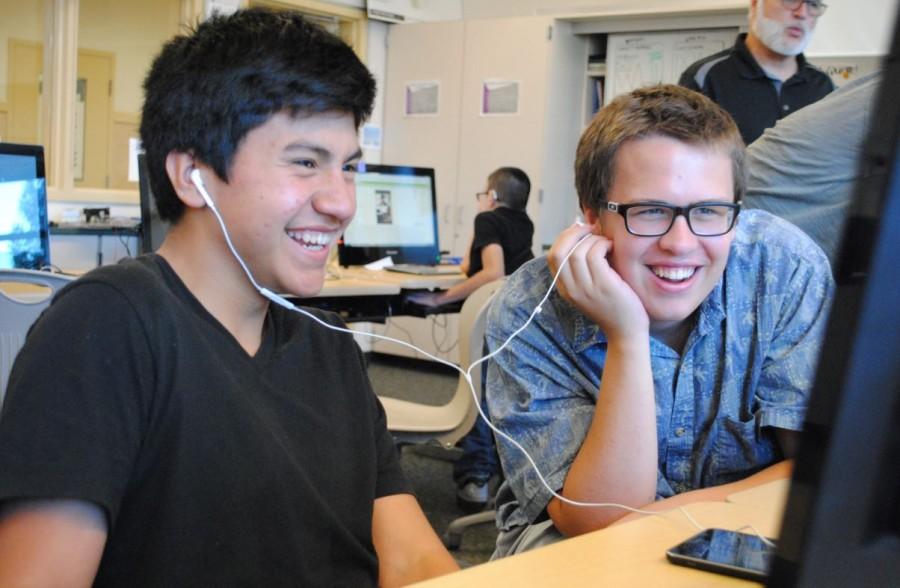 Freshman Hassler Molina and sophomore Ryan Leggett test out their prototype soundboard apps and learn the basics of mobile design.

Sequoia’s latest update in technology this year has been the implementation of a mobile app designing class, created for students of all grade levels with any level of prior coding knowledge. The class is taught in two different periods, one by tech teacher Cameron Dodge and the other by history teacher Victoria Mitchell, who both have experience teaching technology classes.

“The goal of the course is to capture what is happening currently in technology and to make things that are useful for students,” Mitchell said, “It’s exciting going through something the first time.”

Equipped with a set of Android tablets and computers, students are learning how to build and design their own apps. Watching online tutorials is the beginning of app construction. Next, students use a program called App Inventor, which was created by Google, but picked up by Massachusetts Institute of Technology (MIT) in 2012.

The vitality of the class to Sequoia lies in the pervasiveness of mobile app design. It is a universal ability.

“Technological literacy is increasingly important, no matter what type of field you go into after Sequoia,” Mitchell said. “It’s also relevant for school, personal interests and the way you communicate and interact with the world.”

One of the most distinct features of Sequoia is the diversity of its student body. In the mobile app designing class, everyone has varying degrees of tech background—some are learning how to use computers for the first time and others already have coding experience—and this only serves to build up our school’s tech department.

“The beauty of this course is that its mission is to make it accessible to anyone at Sequoia,”  Mitchell said. “I have a very wide range of skills in the class right now, and the class is already working as a group to support each other.”

In fact, isn’t this Sequoia’s greatest strength: our deviating personalities?

Freshman Brayan Lopez Ramos is one student who didn’t have the opportunity to learn what he’s discovering in the class until now. Even though he has little experience with tech design, the class for him serves as a means of empowerment.

“When I was in middle school people said stuff like, ‘You’re too little.  You can’t do anything.’ Now I feel like I’m hella smart, and I can do this; I’m more comfortable now.”

Senior Mya Castro is another student enrolled in mobile app design. The class resonates with her particular passion for psychology.

“When I initially walked into the class, I felt worried.  Computers and I don’t get along—I knew nothing about coding,” Castro said. “[But] there’s psychology that goes into apps. Companies hire psychologists when building an app, so there’s a [career] possibility.”

Castro noted that the class has only started building simple apps, such as soundboards, where a set of a on-screen buttons can be tapped to make distinct sounds.  She, however, is looking forward to creating more complex ones and applying the coding to the technology she uses daily.

“I use my phone for everything, so its really important for me to have all the things that I need on my phone,” Castro said. “There’s so many apps I use for school; our whole education is based around technology.”