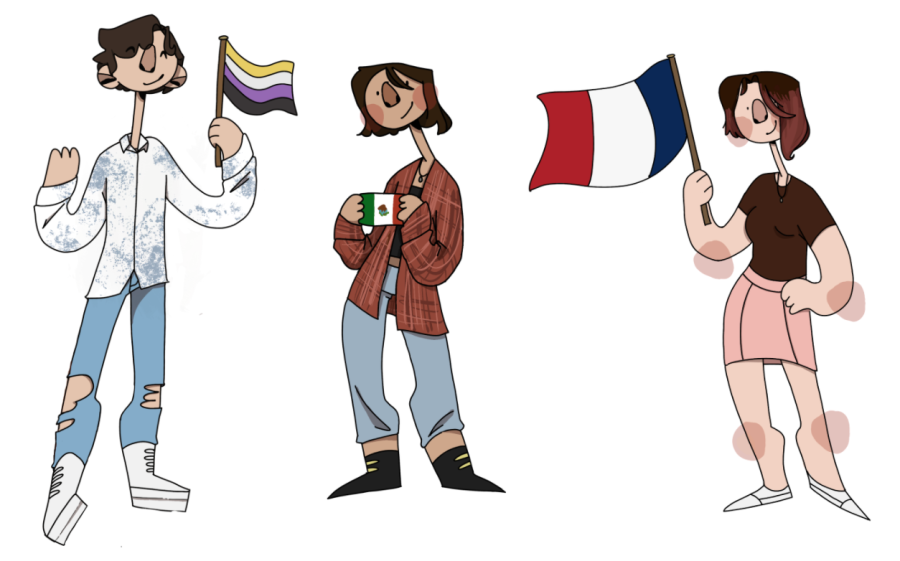 In an age of acceptance, gender-neutral pronoun variations have slowly begun to be introduced to gendered languages, including French and Spanish. While this change has sparked support from queer people around the world, it has received overwhelming criticism from French and Spanish speakers who value the traditional aspects of their languages.

English is a freeform and ever-evolving language that frequently changes based on the slang of new generations and words created by society. Phrases take on new meanings through trends in media and gain popularity and validation through the opinions of the general public. Although stereotypes and personal beliefs bleed into its definitions, the English language does not hold roots to gender.

Unlike in English, the Académie Française and the Real Academia Española (RAE) oversee the languages to ensure stability and uniformity. These romance languages rely on a board of regulators to keep formality and tradition within a structure of a gender binary. Though slang can be invented from French and Spanish-speaking youth, words can only become official if they are approved by their respected academy.

The gender-neutral pronoun ‘iel’ began gaining popularity in the French language in recent years. In Nov. 2021, ‘iel’ was introduced to a French dictionary, Le Petit Robert, defined as “a third-person subject pronoun in the singular and plural used to evoke a person of any gender” (translated from French). Similarly, ‘elle’ was adopted by the Observatory of Words as a Spanish gender-neutral pronoun. Though the establishment of ‘iel’ and ‘elle’  had a major impact on French and Spanish, the pronouns have yet to be accepted by the Académie Française, RAE, and the majority of French and Spanish speaking people all over the world.

Acceptance of new inclusive pronouns flooded the language wing at Sequoia. Teachers have made efforts to introduce them in lessons or open up discussions about them during class periods.

“We had long discussions [in French five] because [‘iel’] came up in the dictionary and [there was a] big fuss in France with the people against, the people for, the people with no opinion,” French teacher Laetitia Kuttan (she/her) said.

Stepping out of their educator positions, teachers can find themselves learning about the developing languages through their students; a collaborative effort towards inclusivity.

“Freshman year, I had my Spanish teacher ask me because I made a poster [about] the GSA (Gender and Sexuality Alliance) in Spanish [class],” senior Spanish speaker and student Nayeli Duran (they/them) said. “I talked about people who are non-binary– and I think I asked him ‘what pronouns would you say for ‘they/them’ and he said ‘I don’t know.’ So I looked it up and then the next day I told him about it.”

Some language teachers have taken extra steps to ensure that their students feel included in a class that is surrounded by gender. By connecting to students outside of the classroom, gender-queer students can feel more understood by their educators.

“Last year, my  Spanish teacher sent me a bunch of resources on gender-neutral pronouns in Spanish and encouraged me to use ‘-e’ endings at the end of adjectives describing myself,” senior Spanish student Skylar Wiggin (they/them) said.

However, these connections and modifications vary from classroom to classroom.

“This year, I don’t know if my teacher knows anyone’s pronouns and there has not been any conversation around that,” Wiggin said. “I feel like in a class where you’re learning the language, [a discussion about pronouns] would be kind of important.”

The topic of gender-neutral word options can be rare among language classes. Just as inclusive as Sequoia strives to be, official changes in French and Spanish don’t necessarily match, making it difficult to instruct with unclear definitions.

“Another wrinkle for Spanish is that there is an official governing body, [RAE], that makes decisions over the grammatical rules of Spanish, so while something may become commonplace in spoken Spanish, there is an actual process to go through for it to be accepted into official Spanish grammar,” Spanish teacher Edith Salvatore (she/her) said. “This is more than […] the style guides for different publications that prefer not to use ‘they’ as a singular, gender-neutral pronoun.”

From a teacher’s point of view, the issue is not of acceptance, it’s purely linguistics. It becomes a challenge to decide whether or not to teach students words that are not official or common.

“My responsibility is to teach students how to interact with the language they will encounter in print and audio-visual media as well as spoken Spanish,” Salvatore said. The concept of gendering all nouns (not just the ones that apply to people) and the adjectives is a big enough cognitive leap for a lot of students.  I don’t want to further confuse them with options that they may never encounter.”

Even though pronouns like ‘iel’ or ‘elle’ may not be taught or used in all language classes, there are still ways that teachers include gender queer students and not ostracize them in learning environments.

“I am sensitive to students in class who either identify as non-binary or who are not comfortable with the gendered aspects of the language.  We talk about synonyms that help skirt the issue in some ways– using ‘estudiante’ instead of ‘alumno/a’ to mean student, for example, but even that can be challenging,” Salvatore said.

American media pushed the mindset that colors, sports, music, clothing and other subjects are not set to a gender binary. Though in French and Spanish, this is not the case. As many language students are first-English speakers, learning a second language that associates strongly with gender can be unusual.

“I find gendered languages on their own to be kind of weird, like, ‘This thing does not have a certain gender, what do you mean?’” junior Spanish student Sabrina Solon (they/them) said.

To combat this, some gender queer students find themselves detaching from the language’s gender rules.

Students have testified that their identities have not been acknowledged in their language class, rather assumed based on their sex assigned at birth. Those who use a mix of pronouns in English or exclusively ‘they/them’ sometimes have to endure using incorrect pronouns to maintain the formality of the language and class.

Being gender-non-conforming and speaking a gendered language has to be accommodating on both sides; a middle ground of understanding must be met so the values of both identities remain valued and respected.

“I think [that using both sets of pronouns] would depend on what [grammar rules] I’m taught about and [if you can] switch between two pronouns,” Thacker said. “It is still important to maintain the integrity of a language while still maintaining the integrity of my identity.”

Gender-non-conforming Sequoia students who were raised surrounded by French or Spanish have a unique understanding on how the language develops and the struggles to incite change in them.

“Since I grew up with it, I understand that they don’t really have a given ‘they/them’ pronoun and I know that they probably won’t because the French Language […] is very stuck on having a gendered language,” sophomore French speaker and student Lou Jamotte (they/them) said.

The differences in grammar affect gender queer people at home whose families are most familiar with gendered dialect.

“My parents, English is their second language, so they were taught ‘they’ as plural,” Jamotte said. “So often when I correct my dad on my pronouns when he is speaking English, he will always remind me, ‘Hey I get it, but I was always taught ‘they/them’ as plural.’”

While they detach from gender on a personal level, queer people can still respect the structure of romance languages.

“I think French [people] should be proud of their language– and it is a very beautiful language though it is very tough to learn,” Jamotte said. “There is a certain beauty to gendered languages in that they have more complicated sentences and more letters, some people might find that nice.”

While appreciation in binary languages can exist, these conflicting identities make it difficult for queer people to feel seen, especially if they are native speakers.

“Spanish is really gendered so it can be really hard for people who are non-conforming or non-binary or genderfluid, because not only are they not given a space in their own culture– especially if you are Hispanic– but it actively excludes you,” Duran said. “Representation in different languages is important because you don’t want to be pushed away from your- or from a culture because it’s exclusive. You want people to be enriched by all cultures.”

Difficulties as a teacher

Gender-neutral pronouns are common in English and are developing in gendered languages. Although, this change is more seen in America rather than in French and Spanish-speaking countries. This poses conflict for both parties that understand new inclusive pronouns and those that do not.

“The hardest part is that it’s not widely spread in the French-speaking world,” Kuttan said. “It’s, in essence, a shame that I could take a gender-neutral kid to France and people might be [confused].”

It’s easier to accept singular ‘they/them’ pronouns in English because of a lack of grammar barriers; a small change from plural to singular has little to no effect on the rest of the language. However, with French and Spanish, this simply isn’t the case.

“The hurdle for a romance language like Spanish […] is that it’s not just pronouns that are gendered, but also adjectives,” Salvatore said. “So where in English I can shift the sentence ‘She is tall’ to ‘They are tall’ […], in Spanish I not only need a gender-neutral option for the pronoun, but also for that adjective. What I’ve heard, like with pronouns, is that there may be an effort to adjust the ‘-o/-a’ masculine/feminine endings to ‘-e’ to make them gender-neutral, but that won’t always work.”

As much as Sequoia has welcomed ‘iel’ and ‘elle,’ IB testing has not accepted them or other gender-neutral pronouns in languages. If a student were to do an IB test and use ‘iel’ or ‘elle’ in their responses, they would be marked down even if it were grammatically correct.

“If we teach our [students] to write this way and then they take the IB test, are we doing a disservice to them?” French teacher Karina Chin (she/her) said.

Hopes for the future

While the lack of validation from the Académie Française and RAE is upsetting, the movement of people that continue to fight for the inclusion of multiple genders in the languages makes gender-non-conforming speakers remain optimistic.

“I feel hopeful about the progress that people are making towards creating gender-neutral pronouns in Spanish and having options for gender-neutral language for non-binary people to use,” Wiggin said.

While we cannot write definitions into French or Spanish dictionaries, there are a lot of changes we can make here at Sequoia to keep gender-non-conforming students’ voices heard. Suggestions such as a short presentation introducing gender-neutral options and regular conversations on how the languages are evolving would be helpful to students that are genderqueer. This way, resources can be given to students instead of them having to search for them on their own.