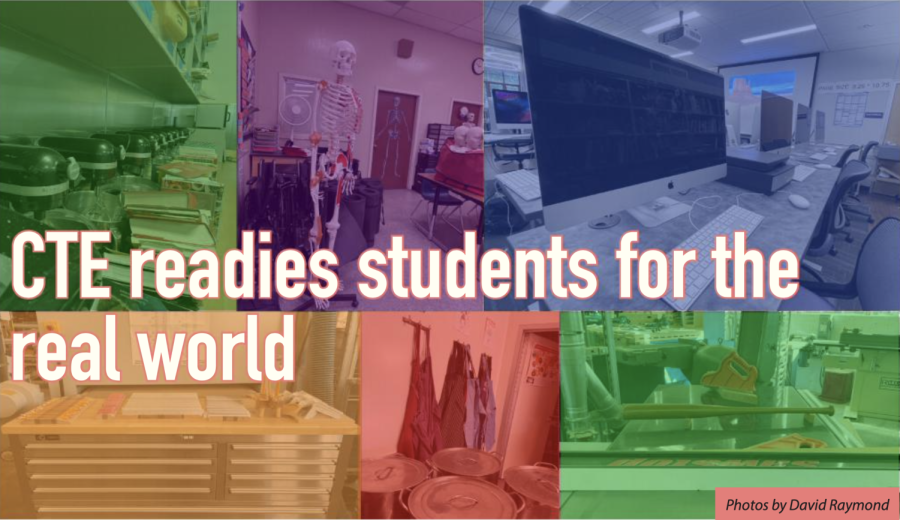 Sequoia offers a variety of options to students looking for classes that will directly translate towards a career. Some of these classes include woodshop, culinary arts, Java programming, and the Health Careers Academy. The academies and elective classes all have the core focus of preparing students for the workplace and college programs.

Woodshop I is suited for all students, even ones with no previous experience.

“We go from essentially measuring, marking – which is understanding basic shop math – and then dealing with hand saws, how to use hand tools safely, and then a progression of the stationary hand to power tools. And then we get into actually how to bring all that together to make projects that require kind of a sequential step by step process,” Ethan Sanford said, a woodshop teacher of 16 years at Sequoia.

Many students take the skills they have learned in woodshop class and apply them in a professional setting.

“A summer job could be a good thing- either a construction site one or at a summer camp,” sophomore and woodshop I student Holden Kowitt said. Not only can students find summer jobs with the skills learned in woodshop, but they can also find full time jobs or internships.

“It’s a lot about personal motivation,” Sanford said. “Students who want a job, there are jobs in the area. After graduation we’ve had many students get full time jobs with construction companies,” Sanford said.

Woodshop is not the only class that can directly lead to job opportunities though.

“In [culinary arts] class, you get the basics- knife safety, sanitation, and following recipes in a group environment… you could absolutely do restaurant or catering work directly out of class,” Reyna Hofmann, culinary arts teacher said.

Culinary arts students can also use this highly specialized class to prepare for college courses and a future career. Bea Reinhoff, a senior in Foods and Nutrition, is planning to use skills she acquired in the class to further her education, and then launch a career.

“I want to study agricultural science in college and then later I want to work in a restaurant,” Reinhoff said.

Students can also study Java programming at Sequoia. “[Java programming is] different from any other class I’ve been in… it teaches you how to kind of decompose a problem into different steps,” freshman Alex Dils said.

“[Java Programming] is fantastic for other classes. It teaches you how to break down a problem. This skill can be used to break down an argumentative essay in English, or a large math problem,” Jared Bitz said, a Java programming teacher.

Not only can career focused classes help in an educational setting, but they also give students valuable real world skills that can be used in a professional setting or in everyday life, such as the Health Careers Academy.

“[Students will learn community emergency response tactics,]… everyone is going to be a patient at one point or another. So you might as well be an active part of your own health care,” Stephanie Weden, a teacher in the Health Career Academy stated.

One of the benefits that encompasses many of the career focussed classes is something that can’t be quantified. With small class sizes and driven students, a sense of community forms.

“I think there’s something to be said when students are spending longer than they have to be in class,” Weden said.