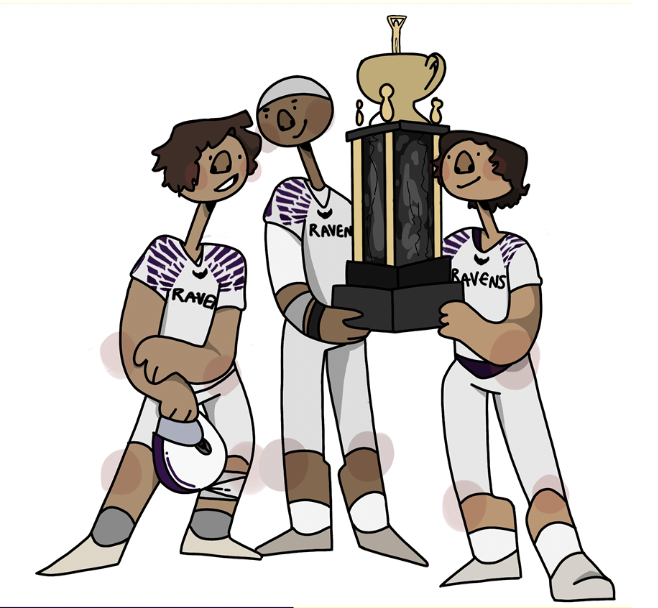 “Man Up” is a part of the Sequoia Football character development program to strengthen connections and individual growth for players.

In large and small groups, divided by grade and skill level, the team discusses issues related to bullying, false masculinity, goal setting, and interpersonal skills. These meetings help players develop and mature as individuals and teammates. Every week the team sessions involve specific prevalent problems seen in Sequoia’s environment, such as bullying, mental health, and healthy relationships. In the beginning weeks on the field, the boys discussed personal baggage and holding on to the past. This helps to give them a safe and comfortable environment in which they can express their emotions, separate from the playing field.  By expressing their emotions they gained self-acceptance and power on the field and in their minds.

The team starts their season strong, kicking off the year, Varsity’s record is 4-6 and Junior Varsity 9-1. In Sequoia’s Man up program, Coach Robert Poulos emphasizes grades and character development over winning, although he says that winning is always nice.

“The goal is that at the end of the year, you should be a better person for having played in the program,” Poulus said.

In addition to building body positivity, inner strength, emotional strengths, and a healthy body, the football program also strengthens students’ skills in sportsmanship, teamwork, competition, and winning as well as losing with integrity. This creates stronger connections between the athletes and their education. The process of making the roster and breaking it up into small teams, senior through freshman, helps to build connections. Guidance from upperclassmen can make every student feel valued and connected, and advancing students’ knowledge of the sport while tackling their school work are both major values of the football team. The goal of this strengthening program is to have all students thriving in both environments, with a minimum 3.0 GPA in the overall team, and avoiding fumbling on the field. Study hall is a mandatory task given to students who fall behind academically.

“We [Sequoia Football program/staff] are not trying to keep you eligible for Friday, we’re trying to get you across the stage for graduation and off to college, so you can come back as an alum and talk to us,” Poulus said.

Senior Varsity football player and IB student, Alex Seroogy devotes himself to the team. Seroogy has been playing tackle football for six years and since his freshman year at Sequoia. Seroogy’s commitment doesn’t stop there.

“Football takes a lot of time and effort but it is worth it due to the team environment that I enjoy being a part of,” Seroogy said.

Seroogy’s love for football and his involvement in the community kick-off his success as a student-athlete.  Seroogy plays a role in the Man Up program as well, he leads one of the squads of varying grades and skill levels.

Seroogy is a role model, he always influences other student-athletes to manage their time and plan out their schedules.

“As a student-athlete, you are doing more than the average student” Seroogy said.

Sophomore, Logan Kern, plays a big role in the Man Up program. As an underclassman, he is influenced by several upperclassmen. Being knowledgeable in the sport, Kern is a mentor to those who are less experienced. The Man Up program builds strong connections and bonds, “Some of my influences were Jack Kern, Daniel Martinez, and Alex Seroogy,” Kern said.

“As a squad leader I am also given the position by coach to help the younger players both in football and in school,” Seroogy said.

On Thursdays, the team discusses current worries, regrets, and emotional baggage the team carries. They tackle both mental and physical challenges they want to improve on. The Man up program lets the team in bonding and allows all players, regardless of age,  to get to know one another. Through this program, everyone feels more connected to all teammates which allows Sequoia to play better as a team.