Teens are increasingly struggling with mental illnesses due to new causes and factors that are leaving researchers and parents stumped.

Approximately 17.1 million children in the US. under the age of 18 have or have had a diagnosable psychiatric disorder, estimated by the Child Mind Institute. Unfortunately, these illnesses don’t often get treated. It’s also estimated that 60 percent of youth with depression and 80 percent with anxiety do not get treatment. After surveying 54 Sequoia students, 6 said that they were diagnosed with anxiety, but when asked if they believe they show symptoms of anxiety, 23 marked yes. The lack of help and diagnosis makes anxiety and depression that much more difficult to cope with. According to the Centers for Disease Control and Prevention, or CDC, the number of children aged 6-17 that have been diagnosed with anxiety or depression has in-creased from 5.4% in 2003 to 8.4% in 2011-2012. TRC Prevention/Mindfulness Coordinator Shari Schussel confirms these changes, explaining how in the last 5 years, TRC usage has increased greatly and teachers have noticed more problems with mental illness. This dear development in mental illnesses is explained by new causes of anxiety and depression Ali that weren’t relevant before.

One cause is more pressure to succeed in school. According to an article in Psych Central, when parents are “overly-invested in performance,” stress is escalated, which leads to procrastination and dishonesty. This increased need for perfection has created a lot more anxiety for students. 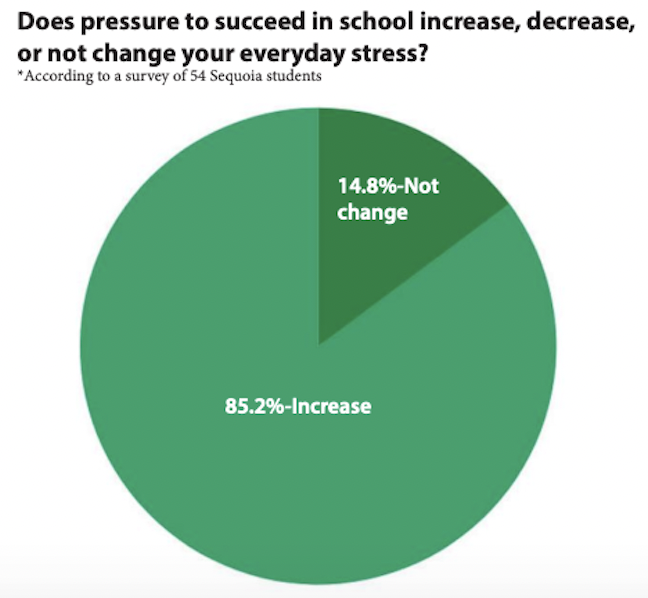 Another cause is the fear of school shootings. There has been a very clear increase in school shootings in the past years and intruder drills are much more common. In 2011, there were 16 school shootings in the U.S. and in 2018, there were 116, according to data from the Center for Homeland Defense and Security. The constant fear of another incident only adds to the everyday stress students already have from school and home life. Also, many more students are aware of current events due to social media, leading to them taking on the stress of world issues that used to only concern adults. An additional cause is the effect social media has on teens’ brains. Social media encourages constant comparison between people and their lives, bodies, relationships and more. The problem Is that people are comparing themselves to unrealistic versions of other people. This leads to lowered self esteem and other mental illnesses that can be very harmful. It is also an easy distraction from important things like schoolwork. For one Sequoia student, who will be referred to as Alex, anxiety affects every part of their life, from school to home. As well as presenting issues between family members, it’s also challenging to make new friends and socialize.

“It makes it really difficult to do things such as present or just simply answer in class,” Alex said. 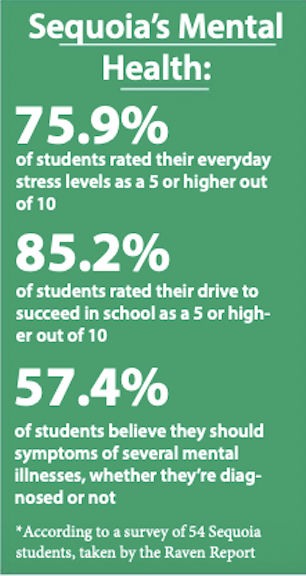 Overall, these new and overwhelming factors for anxiety have aided in the increase of mental illness effects on students around the world. Thankfully, new coping mechanisms and other solutions have been presented over time as well. People are now more comfortable to talk about problems and share tips and information that can ease the effects of mental illness on platforms like social media. One tip that can help ease the effects of mental illness is exercise. Exercise has been proven to release hormones that make people in a better mood. Exercise frequently and you’ll generally feel happier. For more information, there is another Raven Report article you can refer to. Reaching out for help can be incredibly beneficial as well. Mental illness is often very difficult to cope with, and it is much harder when you have to do it alone. Sequoia especially has an incredible amount of resources for students, including the Teen Resource Center, Teen Wellness Center, and more. There are many free and available options on campus for therapy, counseling and more. Simply talking to a family member, friend, or other trusted adult instead of professional help can be just as helpful. Another Sequoia student, who will be referred to as Avery, says talking to a therapist is very helpful.

“It’s better to talk to someone… getting it off your chest helps,” Avery said.

If you’re not exactly comfortable talking about your problems one-on-one with someone, other programs such as meditation in the TRC can be beneficial as well. Many more teachers are adopting meditation practices and implementing them into their everyday classroom routine to give students a chance to breathe and relieve stress. Coping mechanisms from hotlines to aromatherapy can help students deal with mental illnesses. Everyone has different experiences and will therefore have different coping mechanisms. With an immense amount of options, mental illness can be dealt with and treated. And although more different causes and obstacles will present themselves in the future, the only thing we can do is learn and cope.