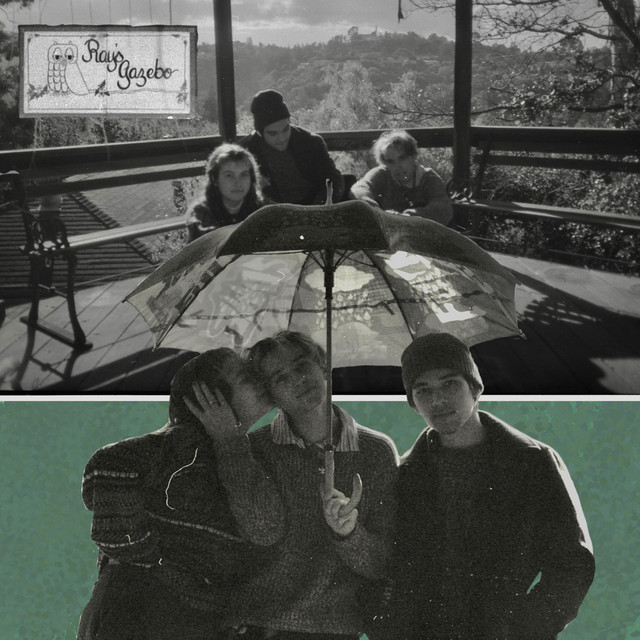 Composed of 4 songs with guitar and drums, “From the Backroom” gives calming and heartfelt melodies with songs like Freckled Palms and All of These Books Lead To You, with each member doing vocals. Every song is filled with old memories for the members, bringing listeners along with them. Mihaly-Baker explains the memories behind the band’s name, Ray’s Gazebo:

“When we were first becoming friends, three or four years ago, we stumbled upon these abandoned houses in the forest. We explored them and we were young teenagers and we were like ‘oh, we’re so bad’. There was this gazebo in the houses and it has a sign on it that says ‘Ray’s Gazebo’ [and] that [became] just a hangout spot for [us for] a while and we created a lot of memories there,” Mihaly-Baker said. “So when it came around to naming a band, it was like ‘that’s our little spot that just holds a lot of memories.’”

Restaino and Mihaly-Baker explain that they’ve always had a love for creating music. Luckily enough, the third member of the band had access to music production equipment, so they were able to record themselves.

“We recorded everything in the backroom of his house, hence the name, ‘From the Backroom’,” Mihaly-Baker said.

Unfortunately, Ray’s Gazebo’s future isn’t super clear. Because of some personal events, members had a falling out and the band is no longer together. Despite difficulties, Mihaly-Baker and Restaino plan on continuing to make music, whether it is under the same name or not.

“So I think we’re just gonna start our own chapter,” Restaino said.

“You’ll definitely see some new music from Eli Mihaly-Baker and Tess Restaino together,” Mihaly-Baker said, “but the future looks unknown as to what that will look like.”

Despite setbacks, the EP was released and well liked by listeners, as it is streamable on popular platforms such as Spotify and Apple Music. Family and friends all raved about it, and Mihaly-Baker said that they had many people reach out to them.

“It was really well received,” Restaino said. “I think we were surprised.”

With Freckled Palms as Ray’s Gazebo’s most popular song, listeners loved the affectionate and calming vibes of the EP. As it was their first time putting out music, Restaino and Mihaly-Baker have gained a lot of experience.

“I’ve experienced how good it feels to just create something out of nothing,” Mihaly-Baker said.

When reflecting on their first EP, Mihaly-Baker and Restaino talk about what they’ve learned through this process. Especially with something as creative as making music, collaborating and planning isn’t always easy.

“I think I learned to say my opinions out loud or else they won’t come to fruition,” Restaino said.

“I have learned that no matter how stable and secure you feel you are and how good you feel for the future, things can always go wrong, and that’s okay,” Mihaly-Baker said.