Indigenous literature is removed from curriculum 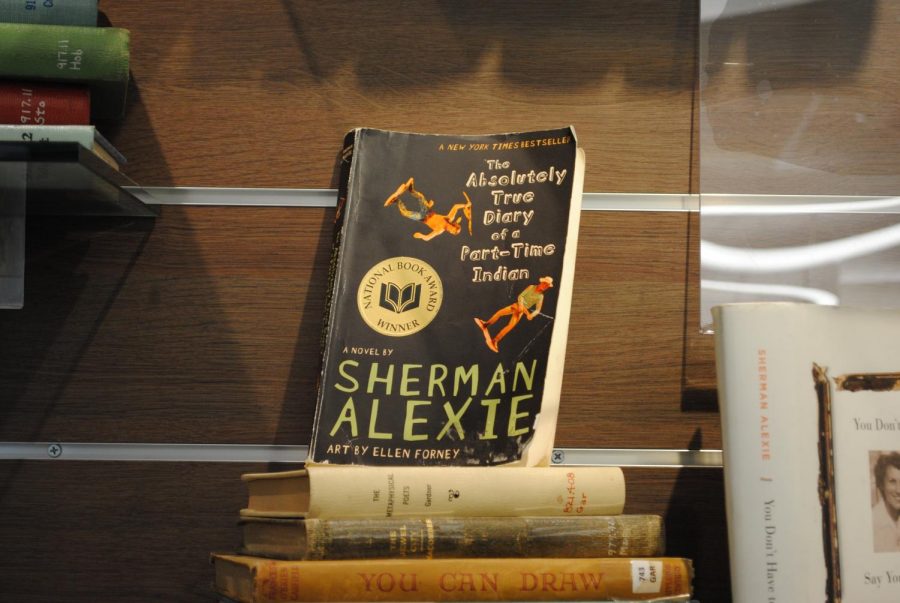 National book award winner. Taught in schools nationwide. Sherman Alexie’s The Absolutely True Diary of a Part-Time Indian is a truly well-loved book because it talks about the often silenced perspectives of Indigenous communities today, as well as struggles with identity and bullying throughout adolescence. Freshman English classes at Sequoia have been teaching it for years. No matter how much praise it gets, it doesn’t change the extremely triggering themes and ignorant ways it talks about disabilities, mental health, misogyny, homophobia, alcoholism and more, as well as the author’s multiple sexual assault allegations.

This year, the ninth grade English teachers, excluding some English support classes, decided to remove The Absolutely True Diary of a Part-Time Indian from their curriculum.

One theme that led to its removal was its unintentional enforcement of harmful stereotypes about BIPOC (Black, Indigenous and People Of Color). This book both covers dark topics of oppression and their effects on people of color. Learning about these everyday struggles is clearly important, but when we only choose literature that covers the suffering of BIPOC and nothing of the joys and triumphs of their cultures, we reinforce the idea that they are nothing more than their oppression.

“It’s my commitment but it’s also our school’s commitment to make the curriculum more relevant to [students’] lives and also take into consideration how to engage in difficult conversations that don’t necessarily center the trauma and pain of a person of color,” freshman English teacher Hannah Singh said. “How can we celebrate and appreciate people of diverse backgrounds but not necessarily learning through only traumatic experiences that oppressed groups experience?”

Although Alexie’s novel brings up several important topics for discussion, it does not use the gentleness and patience that talking about issues of marginalization and mental health require. An example of this is on page 106-107):

She says it with her nose and chin in the air. She gets all arrogant. And then I remember there are a bunch of anorexics who are PROUD to be skinny and starved freaks.”

This is just one of many examples of the unnecessarily aggressive ways that Alexie addresses these sensitive topics. Many students at Sequoia and all over the country struggle with issues like eating disorders, mental health, homophobia, racism and more every day. Talking about the impact of these issues in class can help students feel recognized and seek help. But when characters demonstrating these issues are portrayed as dramatic, one-dimensional and self-absorbed, it only worsens and internalizes the struggles for individual students. There’s no doubt that The Absolutely True Diary of a Part-Time Indian starts conversations about significant topics, but the way they’re addressed destroys any potential for healing communities through conversing and only silences people more.

Alexie’s novel is taught in schools because it’s humorous, relatable and accessible to teens while still including themes like marginalization and identity. It can be argued that Junior’s ignorant inner dialogue adds to his authenticity as a character and that his ideas are meant to be interpreted as naive and wrong. Nevertheless, these ideas can be easily misinterpreted by young students. Considering the author’s history of sexual abuse against women, it’s clear that Alexie participates in the inappropriate sexualization of women in our society. Many argue that one can still appreciate his literature without supporting his ideology through separating the art and the artist. Nevertheless, his ideology will inevitably be conveyed when he writes female characters through his lens of objectification and hypersexualization. A quote on page 109 from the same chapter demonstrates this:

“How is it that a bulimic girl with vomit on her breath can suddenly be so sexy? Love and lust can make you go crazy.”

According to the Journal of Pediatric Psychology, 35-57 percent of adolescent women engage in crash dieting, fasting, self-induced vomiting, diet pills, or laxatives. The way Alexie jokes and romanticizes bulimia completely ignores the fatal repercussions of eating disorders and even encourages this kind of self-harm in order to please male peers.

In addition, Junior’s characterization as relatable and realistic depicts this behavior as acceptable to young readers. I focus on the portrayal of eating disorders in this novel just as an example, not because they are more important than the other issues addressed. The truth is the fatal flaws in this novel are seemingly endless, which is why the ninth grade English team made the right decision to remove this book from their curriculum.

The next question is what to replace it with; the teachers collectively chose to teach The House on Mango Street by Sandra Cisneros and Little Fires Everywhere by Celeste Ng instead, and they kept Shakespeare’s Romeo and Juliet. These newer novels reflect the student body and still address the important themes of marginalization and identity without the flaws of The Absolutely True Diary of a Part-Time Indian. Nevertheless, Sequoia’s entire English curriculum is now missing one thing: Native American literature. The Absolutely True Diary of a Part-Time Indian was the only novel with an indigenous main character taught at Sequoia across all four years.

Sequoia has a long history with indigenous culture. Our school motto, Unaliyi, belongs to the Cherokee. Our dehumanizing and appropriating mascot was a Cherokee for almost a century. Controversial murals remain on campus. We all live on stolen land of the Ohlone and Ramayatush peoples. There’s no doubt that Sequoia has grown over the years and reflected on past actions. Sequoia has made many important changes out of respect of indigenous peoples, which has often led to backlash from alumni (referring to Aviva Futornick’s 2018 Raven Report article on Sequoia’s mascot name change from Cherokee to raven). Nevertheless, now is not the time to stop. It is not enough to declare ourselves allies and call it a day. Sequoia must actively engage students with indigenous culture through literature and other forms of media that demonstrate not only the struggles of indigenous peoples, but the joys of their cultures. In this way, we can create a new generation of culturally informed students and activists who understand the intersectionality of marginalization and how to approach social issues while still respecting the boundaries of different groups.

Cherie Dimaline’s The Marrow Thieves is a young adult fiction novel that portrays the joys and pains of indigenous culture with important historical allusions and an all indigenous cast, including strong female and LGBTQ+ characters. Accessible for students in 9th to 12th grade, it has wonderful and vivid prose for students to analyze and a dystopian setting that keeps students engaged.

Another fiction novel is Tommy Orange’s There There, a story that follows 12 different indigenous characters, of various generations and genders, and their experiences as urban Native Americans. The story delves into the dark impacts addiction and abuse have had on indigenous communities while also exploring the joyous spirituality of their culture. Orange’s poetic and complex writing is filled with pain, rage and love. Darker themes require more mature audiences.

Through including indigenous literature in the curriculum at Sequoia, we demonstrate to students, staff and families that indigenous culture and history matters and must be respected. Through centering indigneous people in our discussions of race and marginalization at Sequoia, we give ourselves a chance to reflect on the social issues of today productively and make a change.