The SAT is Just a Number 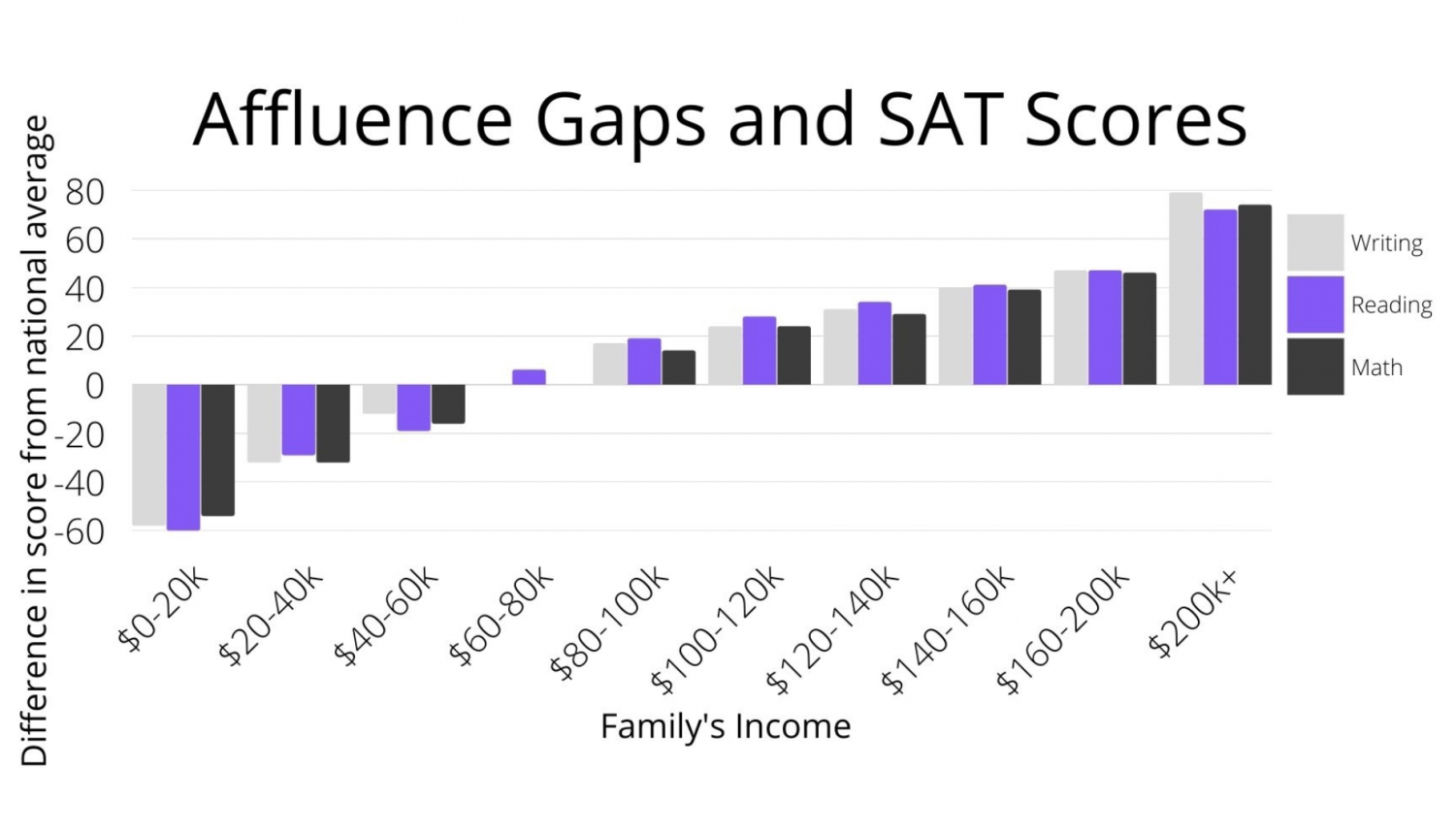 Society has a habit of making people define themselves by numbers; how much money you have, your weight, how many friends you have, how old you are, your grades,  and your SAT score.

It is undeniable that some students live in an environment putting them at an automatic disadvantage-or advantage-for the SAT, a test that uses academic language to ask questions separated into three topics: writing, reading comprehension, and math. There is a strong correlation between SAT scores, family’s income, and race, according to several sources including The Washington Post. When students’ self perception of intelligence depends on a testing number- that isn’t even fair-there can be negative impacts on  confidence.  As the SATs have become a more controversial topic, the College Board has diminished the value placed on student’s test scores in their application. Now, over half of U.S. colleges will be ‘test optional’ for 2022 applicants, further diminishing its importance

“I fully disagree with standardized testing, I think it’s the worst way to show someone’s capability of learning, and I think that the College Board, honestly shouldn’t even look at it,” said Junior Kate Burnett. “It’s too much in too little time, there’s not enough breaks, and there’s a lot of pressure on it, so of course everyone is going to get all in their head and stressed out.  Especially when they’re in the middle of taking it.”

Burnett acknowledges that scores don’t necessarily translate to intelligence, especially when considering how stress can impact performance. While I recognize that the SAT can measure some form of intelligence, environmental factors and learning styles influence SAT scores too much to be considered an accurate depiction.

“Everyone is sorta different in their own way. Everyone learns at their own pace. Like teachers expect you to use one algorithm, and then when you use a different one, they don’t freak out, but they sorta expect you to follow in their footsteps,” said sophomore Juan Chavez.

In addition to differences of learning styles, home situations are very impactful on test scores. Certain families place a lot more pressure on their children to do well on tests. Wealthier school districts tend to have more SAT prep courses available, and be more advertised.  As a result, how well a student does on the SAT corresponds to how affluent their area is. SAT prep is expensive in general, for example Berkely’s Princeton Review with the program “SAT 1500+ Guarantee Tutoring” has a rate of $233 an hour. And get this-this is the starting price that also happens to be on sale. Claiming to guarantee its students above a 99th percentile SAT score, this is a prime example of an extremely advantageous program only available to the affluent.

“The SAT is a business. It’s not like it’s a nonprofit, you pay for the test, you pay for the prep, it’s money that goes to a company. And so, it’s literally profiting off of students, and sometimes students take it five times because they want to get a good score on it,” English teacher Jasmine Schimek said. “They’re profiting off of students ‘needing’ to take this test to get into a good school, to spend more money…That’s another reason why I just like don’t like [the SAT]  in general.”

Schimeck brought a new perspective that I hadn’t thought of before. Last year, my sister constantly studied and took plane flights on two separate occasions to different states to take the SAT. While I commend her for working extremely hard to get a score that she wanted, this raised a question for me: how can the SATs be fair when not all students have family that raised them with more academic language, put a lot of emphasis on standardized tests, and are affluent enough to pay for taking the test multiple times?