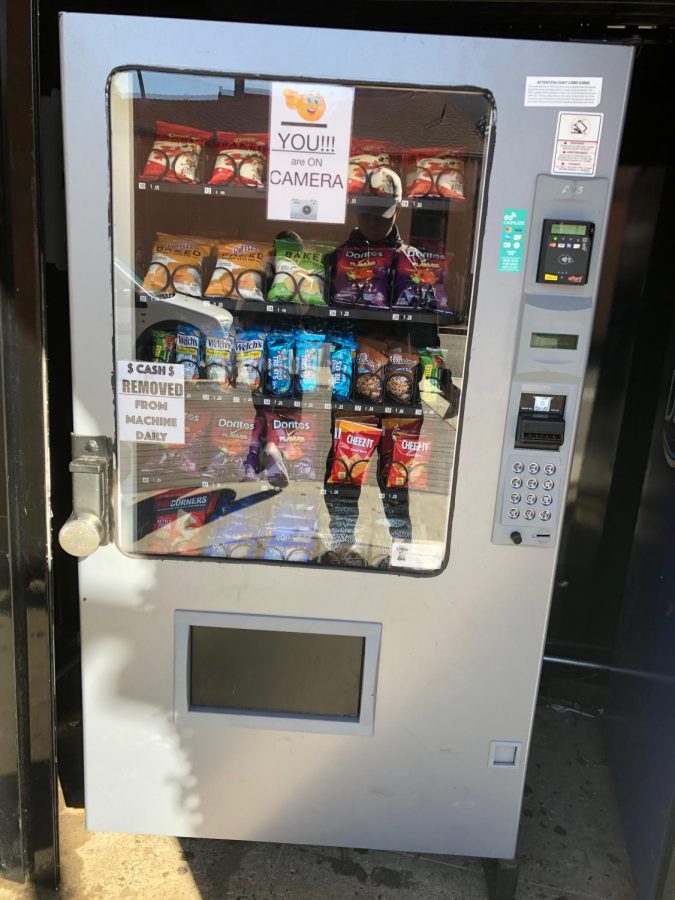 A look at the vending machines at Sequoia

At Sequoia, we have a very significant issue with vending machines located on campus. As of now, we have one location with two vending machines, one for beverages and one for small snacks. It has come to my attention that many Sequoia students are dissatisfied with both, the number of vending machines on campus, but also the options that the vending machines have. However, the main issue that students have is finding something to eat during both brunch and lunch. Many students pack their own lunch, but sometimes students might not have enough time to pack their own lunch or go grocery shopping for food options. Now, yes, many students choose to purchase hot lunch from the MPR, but every single lunch period, you have to wait in a 10 minute line just to get served. Additionally, the school lunches don’t exactly seem to be the most appetizing. This is why more vending machines should be implemented around the campus. It won’t take 10 minutes to get food, it is substantially more inexpensive than hot lunch, and most of all, the options are a lot more appealing to the students.

Another major thing that would be solved if Sequoia were to put more vending machines around campus is, students would be less likely to leave campus during lunch to get food anywhere else. This is a win-win situation, students get the food options they want from the vending machines and administrators don’t have to worry about the safety of their students if they decided to leave campus. All in all, the vending machines would be a very prudent decision for Sequoia to take on, not only for the food, but for the safety of the Sequoia students. Yes, some may argue, “We serve hot lunch at school for a reason, students shouldn’t be leaving campus to go get food when there is food that is a lot more accessible and more affordable”. I don’t think many would disagree with this statement, however, are the options that Sequoia serves for their hot lunch really have any nutritional value? Certainly, that question is up for debate, but I think the main thing that Sequoia has to focus on is implementing more vending machines on campus with appealing food options to the students. This will one, make Sequoia students a lot happier, and two, reduce the amount of students who leave during lunch, which would then reduce the amount of problems that could occur involving student’s safety.

After speaking with two Sequoia students, they both seemed to express deep concern regarding having only 1 vending machine on campus without options that appeal to them. These two students did indeed inform me that in the past, that they have had ideas about leaving the campus during lunch to get other food from Sequoia Station. “I just think if Sequoia came up with a plan to implement more vending machines the campus would benefit from it alot and it would make students a whole lot happier” said Vera. The other student I talked to said something very similar, however he wanted to keep his identity hidden.

The vending machine crisis should be solved someday in Sequoia’s future and as far as when it will be solved, is undetermined. However, optimism is key and students at Sequoia will continue to support this major crisis.