Sequoia Falls to Half Moon Bay in Blowout Fashion 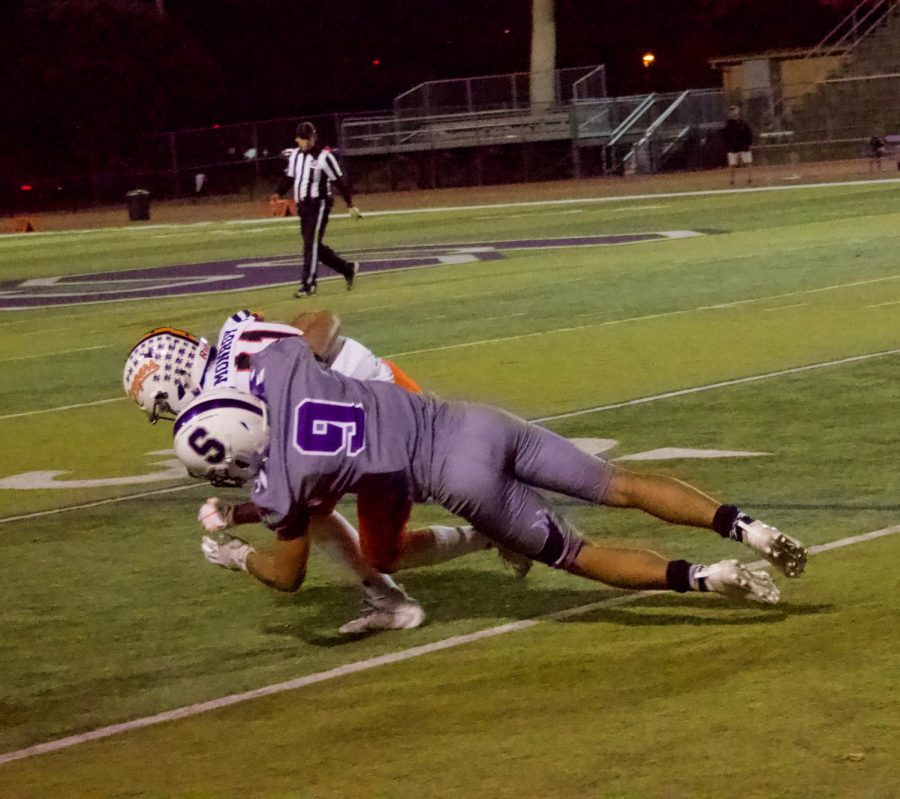 Cornerback Steven Stone makes a tackle in the backfield

Following a loss to San Mateo, Sequoia was 3-4 and looking to bounce back to remain .500. Though to do this, they would have to beat 7-0 Half Moon Bay, who is ranked in the top 100 in California.

“If we went out there and played hard, not worrying about making mistakes or being the hero, but just playing our game and doing our jobs, I think we could come away with a win,” wide receiver Travis Reeves said.

The game did not get off to a good start for the Ravens as Half Moon Bay received the opening kickoff and got into the endzone in four plays. Sequoia was able to make a stand on the two-point conversion leaving the score at 6-0, less than 3 minutes into the game. On Sequoia’s first possession of the game, they were not able to get anything going and punted away after getting one first down, marking the 6th time in 7 games in which Sequoia was scoreless on their opening drive.

“Our team looks timid and scared at the start of games. We usually pick it up by the second half but we definitely need to work on getting off to better starts,” senior safety Nolan Tarzon said.

Despite the opening drive touchdown by Half Moon Bay, the first quarter was a defensive battle and ended with the Cougars holding onto a 6-0 lead. The second quarter didn’t prove to be much better for Sequoia as at halftime, they trailed 21-0 following an 18-yard touchdown pass on 3rd and 8, as well as a 15-yard touchdown pass to cap off a 35-yard drive.

“We have got to get going on offense. First priority is getting the run game established. The rest will take care of itself,” starting quarterback Damare Ward shared.

Early in the second half, things were not going according to plan. Half Moon Bay scored early on a 32-yard touchdown pass up the seam. This put the Cougars up 28-0. Sequoia finally got on the board with a 12-yard touchdown pass from Kyle Parker to Steven Stone. This was one of Sequoia’s few highlights on the day as they put together a solid drive, containing a few 4th down conversions.

“After that touchdown, we felt as if we had some momentum and had a shot to come back. All we needed to do was get one stop and get the ball back to the offense,” Reeves said.

Unfortunately, Sequoia was not able to get the stop, and the game slipped away. The game ended with Half Moon Bay winning 42-13, moving to 8-0 on the season while Sequoia falls to 3-5. Next week is Senior Night, which should provide the Ravens with much-needed life and energy.

“We are all excited about Senior Night next week and we really hope to put on a good show for the fans. Hopefully we can have a good week of practice and show up and play some good football next Friday,” starting center Evan Velline said.

They play against Menlo who is 3-5, so the game should be a good one.