Politics hits home for students with parents in office 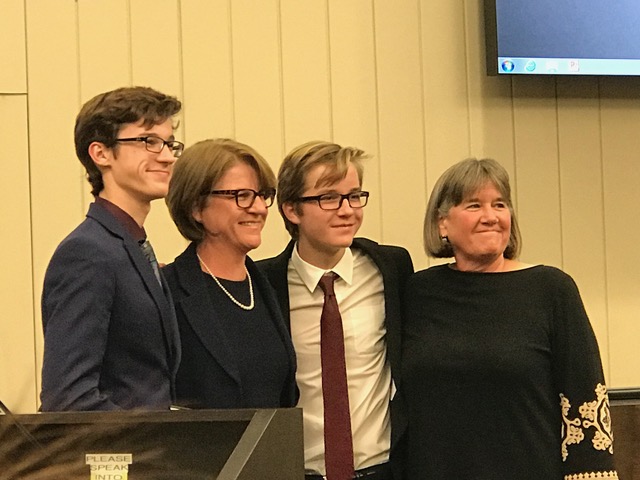 On Dec. 10 Bradley and Greg Parmer-Lohan swore in their mother Laura to San Carlos’ City Council before she participated in her first City Council meeting as a councilwoman.

Pride, stress, excitement and a sense of responsibility filled the air Dec. 10 as Bradley and Greg Parmer-Lohan swore in the newest member of San Carlos’ City Council: their mother Laura.

Laura Parmer-Lohan, the mom of both Bradley, junior, and Greg, freshmen, was elected to the San Carlos City Council on Nov. 6. She ran her campaign on the theory of “leading by listening” with a platform focused on addressing traffic issues and protecting San Carlos’ parks and open spaces. She received a total of  27.78% percent of the vote, the most of any candidate in the race.

“I’m just real proud of her,” Bradley Parmer-Lohan said. “I see her at home, and I know how hard she was working to get to this point and how much she was thinking about it.”

For Laura Parmer-Lohan the decision to run was one that stemmed from family.

“My youngest son had given me feedback that he was very dissatisfied with the way that many of our country’s leaders were treating each other,” Laura Parmer-Lohan said. “It made me pause because I realized that we ask our youth to treat each other with respect and kindness and be thoughtful about how they resolve conflicts, and I believed in that moment that we could do a better job.”

Beyond serving as part of her inspiration to run, she also asked both sons before announcing her candidacy if they would be supportive of her running for City Council, recognizing that this decision would impact the whole family.

“It was a family decision for me to run, so they gave me input and they asked for certain commitments from me in order for them to give me their ‘yes’ to do this,” Laura Parmer-Lohan said.

On election night, the Parmer-Lohans hosted a watch party where all of the people who helped on the campaign were present. The votes were displayed on a screen and every couple of minutes it was refreshed to display the votes came in. The final results were not ratified until 30 days after election day, but by around 11 p.m. that night it was clear that she would be one of three new City Council members.

“The night she was elected it was pretty exciting,” Bradley Parmer-Lohan said. “We were refreshing the page every couple of minutes, and it was just really exciting because everybody who helped on the campaign was there.”

Laura Parmer-Lohan was sworn in on Dec. 10 by her two sons, something both thought was a highlight of the process.

“It was definitely a fun experience,” Greg Parmer-Lohan said. “It was kind of stressful but not at the same time because we were swearing in a city official, so you can’t really mess up but at the same time its my mom.”

Both Bradley and Greg participated in the campaign process. They helped out by participating in anything from block walking to passing out flyers to running a booth at Hometown Days. For the months leading up to the election, campaigning became a family activity and one which they all enjoyed.

“I helped her out when my schedule allowed,” Bradley Parmer-Lohan said. “When I didn’t have too much homework, I was block walking with her, putting flyers on door knobs and talking with people.”

For now, neither Bradley or Greg thinks they will run for office when they grow older. They both agree that this is there mom’s ‘thing’, but they both recognize that through this  process they’ve learned a lot about how local government works.

“I learned more about how things work in San Carlos,” Greg Parmer-Lohan said. “It’s just cool to think about how if you’re up to the task of running for City Council, it’s definitely feasible, if you have the determination like my mom had.”

As for students whose parents are considering running for office, Bradley Parmer-Lohan has this advice.

“It’s a lot of work, and it’s going to be a grind,” Bradley Parmer-Lohan said. “Just do your best to support your parent because they’re just as stressed about losing time with you as you are.”