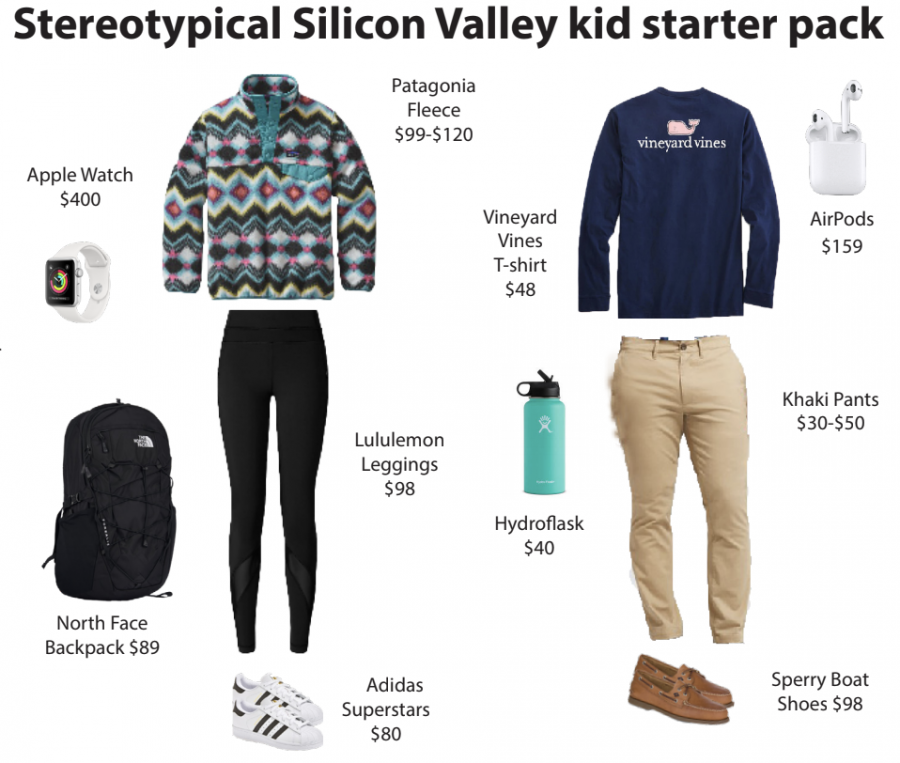 The stereotypical Bay Area look remains unaffordable for many, typifying the stark divides between groups.

From Airpods and Hydroflasks to North Face and Patagonia, the Silicon Valley lifestyle is evident in the halls and in the classroom. Many students in the Bay Area are seen sporting this look, flexing their $400 Apple watches and $100 North Face backpacks. This lifestyle is known for being fun and trendy; however, this relatability only applies to those who can drop that kind of cash.

According to Data USA, a website that calculates housing and living statistics of every city, the average household income in Redwood City is $90,461 while San Carlos comes in at a whopping $135,220 average household income, compared to the national average of $61,858. These high average household incomes allows some to splurge on clothing; however, the propagation of this ideal ignores those who cannot afford to partake. Furthermore, these trends are predominantly worn by those who are white and Asian, which does not encompass all that live in the Bay Area.

One can end up spending hundreds, maybe even a little over a thousand dollars to obtain this look. Many students tend to want to follow what’s trendy, and that often means spending those benjamins.

“My [Puma] shoes were on sale for $30, my Lululemons were like $98, my Brandy Melville top was $25, this [Patagonia] jacket was like $230, and my North Face backpack was $100,” junior Marika Fong said. “[I can relate to] the types of clothes people wear, [having] a Tesla, and my parents also work for a tech company. I feel like everyone thinks that it’s normal.”

With these outfits adding up to a hefty amount, some students find that spending so much money on it is unnecessary or out of their price range.

“My personal friend group, we don’t care about these things. We don’t really fit into this stereotype,” sophomore Jordan Smith said. “We don’t really have as much things like everybody else.”

Because the Silicon Valley kid trends are so prominent in the Bay Area, it becomes almost an unspoken rule that you have to follow it.

“I don’t understand the cult mentality of it, especially with the Hydros,” senior Diego De Nault said. “I feel like it goes beyond water bottles. It’s become a thing where it’s sort of a right of passage, in certain groups, to have a Hydro and be apart of that.”

Because of the popularity of these trends, some students might feel pressured to dress a certain way, or have certain things because it seems as though everyone is.

“It’s definitely limited to a certain amount of people. Not everyone’s given the same [economic] advantages of others,” Fong said. “I think other people feel pressured to be this Silicon Valley norm, but not everyone can fit in.”

Since trends in this area tend to be very expensive, relating to it can leave those who can’t necessarily afford it out of the picture.

“I can’t really relate to hype-brands [which are] brands that people follow, like Supreme, and Vape, expensive brands like that,” Smith said. “I can’t afford them and if you don’t have the money for it, you can’t really fit into the stereotype.”

The Silicon Valley kid stereotype makes the division amongst students more evident. Walking down the halls, it’s clear who belongs to which group.

“Although we all live in Silicon Valley, there is still evidently going to be a divide between people, and I think that already with the divide at school, having this money topic as a barrier also is not helpful,” senior Cassidy Flynn said. “I think it might alienate people in a way that makes them feel less worthy or valuable.”

Feelings of judgement and alienation may be felt by those who either choose or are unable to follow these trends, an attitude many agree should change.