The good and the bad of e-cigarettes 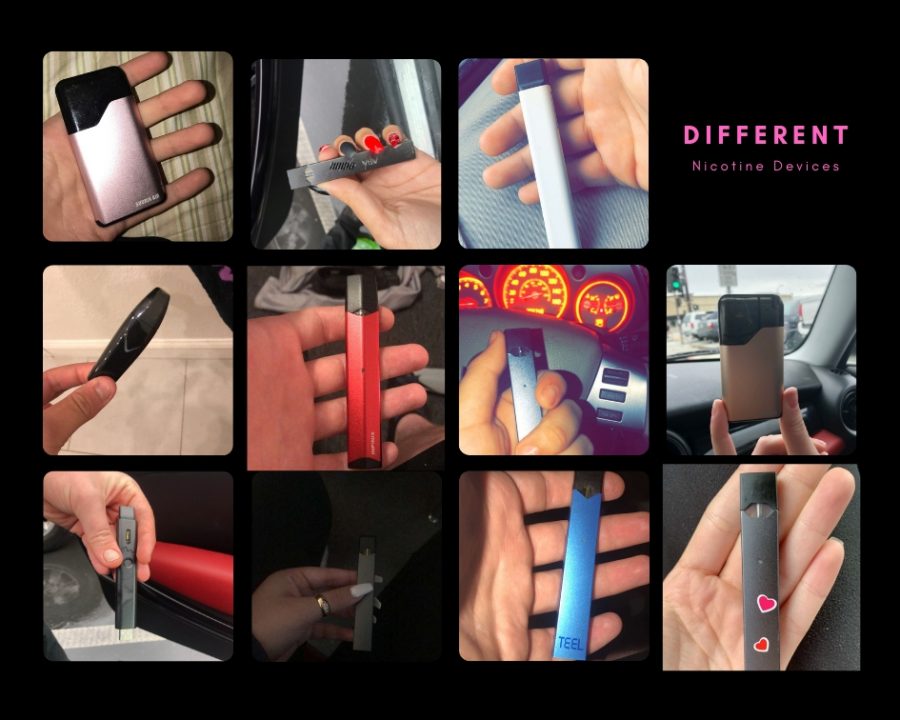 A quick request on Snapchat fro pictures of e-cigarettes resulted in a flurry of responses from teenagers.

E-cigarettes are starting to take over teens’ lives outside and during school. At Sequoia, students have been seen smoking in the bathrooms, during class, at lunch and while waiting for the bus. E-cigarettes have become a new trend since 2017 when they became popular, and it may or may not be the healthiest thing for developing teen brains.

“Growing up school was one of the foundations of me experimenting with smoking,” said School Resource Officer Filise Maafu, the “campus cop.”

According to the Center for Disease Control and Prevention, the effects of using e-cigarettes at such a young age are addiction, wanting to use other addictive substances, reduced impulse control, deficits in attention and cognition and mood disorders.

“Kids think that if it’s in a device, it’s safer. We don’t know what the actual juices do to you or the other ingredients. We don’t really know the effects of what it can do,” said Zayn, a senior whose name has been changed.

E-cigarettes—electronic nicotine devices that, when inhaled, deliver vaporized, flavored nicotine into the body, seen in an array of shapes and sizes—don’t contain tobacco or other harmful chemicals like in real cigarettes, so they aren’t as toxic.

Many E-cigarette juices come in varying strengths of nicotine and some juices don’t contain any. The point of having little or no nicotine is so that former smokers can gradually start cutting back their nicotine intake, but can still enjoy the sensation that smoking brings. Juuls were originally made for smokers who wanted to quit. However, many teens have appropriated the product, despite not previously being addicted.

“One of my friends bought it for me at a liquor store where they don’t ask for ID,” senior Harper said.

The shape of the Juuls and other e-cigarette devices make it easy for underaged kids to hide them and use them in school. The style of the Juul wasn’t meant to look like a USB, like most people compare the device to. Instead, it was shaped to not resemble a cigarette.

“I see kids all over school do it. Mainly in the bathrooms,” Harper said. “Not [often] but there have been times where I’ve seen kids do it in class while the teacher is on the other side.”

Several sources found that teens who never previously smoked and just now jumped into the trend have a greater risk of future smoking. About 10,000 responses from a University of California, San Francisco survey said they had not smoked a cigarette once prior to using e-cigarettes.

“I smoked a whole pack once last summer. It took me two weeks to finish a pack. That was the only time I smoked cigarettes, after that I got a Juul,” Zayn said.

The FDA started in September 2018 to crack down on the distributing of the more teenfriendly flavors at gas stations and convenience stores.

“Smoking e-cigarettes are very popular now. It tastes good and it doesn’t have the same chemicals as real cigarettes,” Harper said.

E-cigarettes are really popular and kids want to find a way to relieve stress, feel good and give them an escape. Many teens say they aren’t addicted and just do it for the rush.

“No, I am not addicted. I just do it because it relaxes me. I could stop anytime,” Harper said.

Most, however, teens started doing it because they wanted to fit in and soon started to like it. E-cigarette chemicals aren’t as bad, so teens tend to continuing to smoke because they aren’t very worried about the effects.

“I smoke because it helps with my headaches and then I started doing it because I liked it and it relieves my stress,” Zayn said.

Although it might help with things like headaches or stress it is still illegal on school campus and for underage teens. On campus cops and security are required to confiscate these devices.

“Teens can just go into a shop and buy it like it’s candy,” Maafu said. “I’ve seen kids hide it in their sweaters and hoodies and most look like USB chargers. [It’s] way easier for this generation to access it and hide it.”

According to Med Shadow, “Chronic Obstructive Pulmonary Disease or COPD is the third-leading cause of death in the U.S. and 85 to 90 percent of those with the disease smoke or did so for a long time.” If people changed over to E-cigarettes it would slowly lower the death percentage because anything is better than cigarettes.

“It’s easy to buy and get a hold of. There are smoke shops on every corner,” Maafu said.

Names have been changed for anonymity.