The Intimate Conversation With Michelle Obama 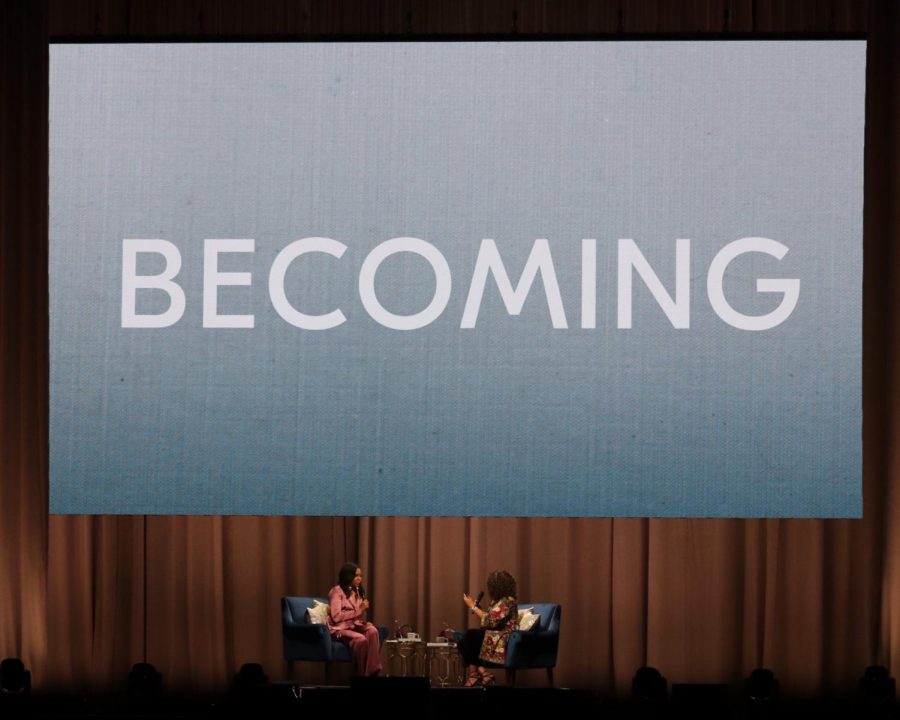 When I walked into the already crowded SAP Center alone holding nothing but my ticket, student identification and notepad, I wasn’t totally sure of what was about to come. The only thing on my mind was the fact that I was a few hours away from being in the presence of one of the greatest, most progressive political faces our country has ever seen. That was my reason for being there. And I believe the thousands of other women in that arena were all there for the same reason: Michelle LaVaughn Robinson Obama, the 42nd First Lady of the United States, the first African-American first lady, activist, lawyer, author, wife, mother.

After releasing her new memoir “Becoming,” Obama has made tour stops all across the U.S. including San Jose on Friday, Dec. 14.

Obama has toured all around the U.S., but because of her global appeal, she will be embarking on a European tour leg in April of 2019 to encourage and inspire women around the world. This show, like the rest, was completely sold out weeks before. Ticket prices ranged from $500 up to $1,200. It is clear how loved our former first lady is, as she continues to fill every single seat at every single show. This night, she spoke to a crowd over 17,000 audience members.

Obama is often times described as a giver by fans and colleagues. For all of her shows, she gave away dozens of free tickets to various local organizations. Lucky for me and my editor-in-chief, we scored student press passes to her show, and here is how it went:

The show that I was about to see was loosely based off of her memoir; beginning with her early life, proceeding with her college and career life, including a special portion dedicated to Barack Obama, of course, and closing off with her and her family’s political transitions. Obama covered much of her life in great depth, however, she tied much of what she said back to her great belief in encouraging and believing in young children— especially girls. The tour’s slogan “An Intimate Conversation With Michelle Obama,” really shined through.

When first entering the venue, I strolled back and forth around the long hallways of the arena and noticed all types of individuals imaginable. Although the venue was jam-packed with mostly women, there were a number of men, young and old. And to them, I give my gratitude. More importantly however, this crowd contained every type of woman I could think of: different ages, races, ethnicities, styles, interests, energies, but all striving to “become” something. As Beyoncé’s “Run the World (Girls)” played ambiently throughout the arena, all the women danced, laughed and had a good time together.

Noticing this, that which stood out to me the most was the unity. Even though our country has been unequal, divided and often times counterproductive within the last few years, all of these strong, well-versed women chose to unite this one evening. Although I heard the wise words of many women, what I would come to find out was that this unity would be the most beautiful and inspiring part of my night.

Before Obama took the stage in her stunning fuschia silk pantsuit, accompanied by moderator Michele Norris, five people lined up across the under-lit stage. Obama invited these people to share who they are “becoming.” These guests included a young girl scout, an Air Force officer, teen activist Riya Kataria, and entrepreneur Ayesha Curry.

By allowing these various people to share who they are “becoming,” Obama created a safe and unified environment early on, where people felt comfortable feeling open and vulnerable with one another, what I call togetherness, or unity.

“I am becoming wise and more comfortable in my own skin. I am becoming someone who won’t let anybody steal my joy,” said Norris, former National Public Radio evening news host.

“The title [Becoming] came well after the story was written because we were trying to figure out what this book is really about,” Obama said. “I got further and further into it and realized that there isn’t really one point to it. It is a journey and the word ‘becoming’ reflects and connotes [it].”

A lot of the work Obama has done and continues to do is centered around helping and encouraging children. Obama is so fond of working with children because she is a strong believer in encouraging humans from a young age, just like how she was raised.

“[My parents] were never the type of parents who thought their child should be seen and not heard. I learned to value my voice, first and foremost, in my home, at my own table with parents who thought everything I had to say had value and merit. My voice was encouraged, but guided,” Obama said.

Obama shared an anecdote with Friday’s crowd about her damaging, unproductive 2nd grade class. As a 7-year-old, Obama was able to see the flaws in this class, and see where all the students were headed. But because of her ability to voice her thoughts and opinions, she talked to her parents about the issue, and ended up moving into accelerated classes. Obama strives to be the adult who encourages education, ideas, feistiness, and confidence in all children who may not naturally have those qualities.

One of the reasons millions of people are so invested in Obama is because of her ability to see and strive for hope in everyone, along with her strong, yet nimble feminism.

“Sometimes when girls have that fiery, feistiness inside of them when they are young, we try to put it out because we are afraid for them,” Obama said. “Luckily, my parents had the foresight to keep that flame lit, respectfully.”

Obama works everyday with, not only her own daughters, but with young girls across the country in order to create a strong, prepared Generation Z. One of her bigger ideas that she discussed was this preparation for the future.

“Loving a little girl to death doesn’t help her face the world that she is going into. Treat her as a respected equal, someone who has her own mind,” Obama said.

Obama used many stories from her own childhood to reflect on the ideas that she strives to teach children every single day. While continuing to highlight her need for inspiring and teaching childhood encouragement, she shared another anecdote about her high school counselor who often didn’t believe in her or how far she would be able to go. This story was a huge factor for Obama when choosing how she was going to focus her passion and influence.

“There are too many people who make snap judgements about kids and their abilities,” Obama said.

When she dug into this idea, mothers and daughters around the arena listened and absorbed the wisdom and information together. Obama’s words were inspiring and influential for women of all ages. Unfortunately, I didn’t get to attend this once in a lifetime event with my own mother, although I would have loved for her to be there with me. It was a learning experience for both people in a mother-daughter relationship. Daughters learned the risks and hardships of being a mother, while the mothers learned the challenges and obstacles facing young girls in today’s society. I have talked to many highly educated, outspoken women in my life, but nobody understand these struggles like Obama does. Nobody is able to voice these challenges like Obama can. And nobody is able to act upon the future of these issues like Obama is. Women all around the audience were so captivated by these abilities that every so often you would hear a “whoop,” “yeah,” or “mhm” from highly-inspired women around the crowd.

After a long night of hearing and understanding all of the things the people around me are becoming, I was able to see it for myself. Having heard the incredible words about encouraging all children in every way, Obama has inspired me to become a person who has hope. Hope for herself, and hope for her future. I feel hopeful because I have a woman like Michelle Obama pushing for greatness for my country. I feel hopeful because of all the educated, strong, independent women in my life who are wishing for the same things.

One final “mhm” moment from the crowd was when Obama shared one of her most common sayings: “The greatest gift you can give someone is the gift of time.”

This night, a night that marked history in my book, allowed me to see that, even with the comical political system we are living with now, I truly have been graced with the gift of time by women like Michelle Obama. And for that reason, I, Taylor Gayner, am becoming.