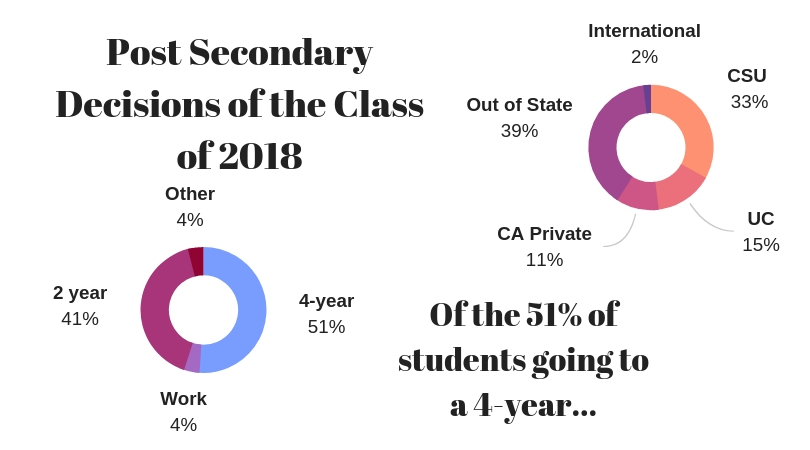 In terms of sending its students to 4 year Universities of California (UC), California State Universities (CSU), and private California universities, Sequoia has set a high standard for the district, with 51 percent of the Sequoia class of 2018 attending one of the three aforementioned. But in terms of ensuring a healthy attitude about college in general, Sequoia’s events, policy, and attitude have left students with an unrealistic attitude about college; the attitude that a 4 year college is the only option, and that there is no excuse to not go to one.

Sequoia has a long history of sending students off to high achieving universities. In fact, Sequoia was founded as a preparatory school for Stanford University, according to the school website. We have had, especially as of recently, high IB exam scores across all subjects offered at Sequoia. All the while, students at Sequoia have to juggle a job, at least one extracurricular, family life, volunteer work, and many other accolades that could guarantee them a spot in the 4-year college of their choice. But for people like myself, despite all of the achievements we have under our belt, the trophies on our shelves and the plaques on our walls, a 4-year university just isn’t the right fit.

At Sequoia, the “normal” plan for college is to apply to and, once accepted, live on campus at a 4-year university, usually in California. For many students, that isn’t realistic. Whether for financial, mental or physical health or other personal reasons, 4-year college is not for everybody, even though many may have the merit to make it into those schools. I have an alternative college plan that doesn’t fall within the norms of a post-secondary education. When I tell people I’m not applying to an on-campus 4-year, they get confused.  My grades are good, I have volunteered my time often, my extracurriculars are consistent; I’m more than qualified to make it into a 4-year if I wanted. But that’s exactly it; I don’t. I’ve been told I haven’t been living up to my potential, and that I’ve given up. That sentiment isn’t anywhere near valid, and it demoralizes people like me all around Sequoia. My choice shouldn’t be a taboo one, and students like me are just as deserving of support from the people around me as students applying to a 4 year receive.

Last year, 51 percent of seniors left Sequoia halls enrolled in a 4 year college, 59 percent of whom went to a UC, CSU, or Calif. private. Around 8 percent of Sequoia students either joined the military, began a specialized program, or joined the workforce after graduation. Those students had specific resources presented to them; representatives from the Army and the Navy set up tables during passing periods, and representatives from trade schools were invited to give students information. Students not planning on these options were left without a program or informational meeting specifically for students planning on attending a 2 year that would help them in their life after high school.

I watched firsthand as my friends applied to 4-years colleges and universities last year, and the stress of the entire process had taken a significant toll on them and their personal lives, despite all of the help that Sequoia gave them. The precise polishing of their essays, college visits and competition between friends applying to the same schools became all the more stressful when combined with senior year homework, Internal Assessments, extracurriculars, and the multiple jobs several of them had—not to mention the financial stress and toll on their families once they got accepted. Witnessing the turmoil my friends went through last year (although they say it was worth it) made me think to myself: “How much do I really want this? Do I even need it?”

The whole college process, including and especially the 4-year application process, is stressful enough. But what makes this process even more stressful, for all students, is the competitive attitude that most people intrinsically have about college. I see students losing sleep every night over their UC applications, their Common App essays and everything else they have to get together for their application process. That stress, while worth it for some, is by no means necessary for a valuable and enjoyable college experience.

If any of what you’ve read sounds like it applies to you, and you haven’t begun the application process, don’t feel like you aren’t “living up to potential”. Your potential is whatever you decide it is. Don’t let the standards other people set for you determine the decisions you make about your own life. There are enough hoops to jump through as it is.