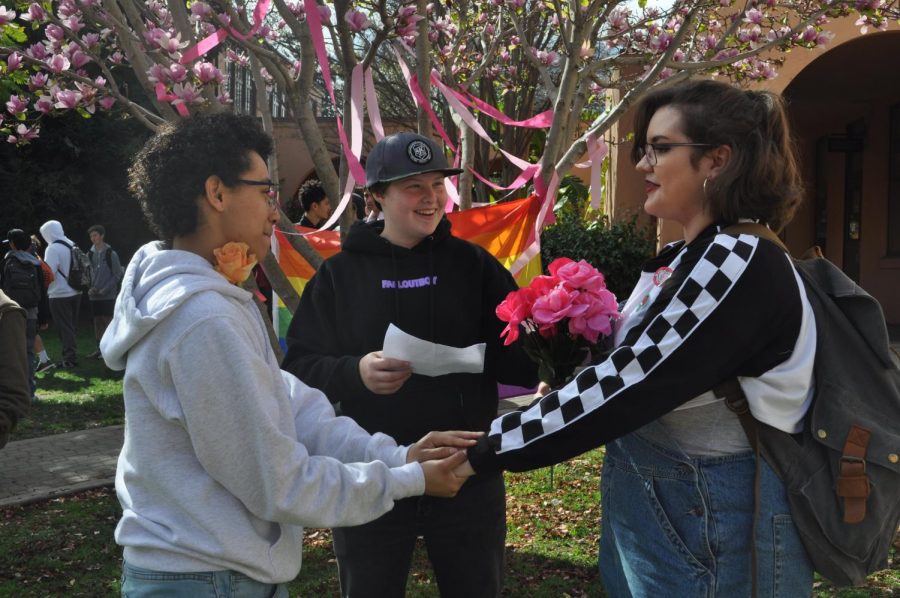 The Sequoia Gender-Sexuality Alliance (GSA) held their annual marriage fundraiser Feb. 16 in the quad. About 100 students gathered to be married or have their vows renewed from earlier marriages.

Students from Sequoia’s orchestra played live music and streamers were hung in the trees to decorate the quad on the day of the event. GSA members acted as officiants for the marriages.

The GSA has held this fundraiser since 2014 to raise money for club activities and donations. The marriages began as a way to protest government regulated marriage laws. Since the 2015 Supreme Court decision that legalized same sex marriage nationally, the marriages serves as a celebration of the strides the LGBTQ+ community has made.

“The Valentine’s Day celebration has been around for a really long time. It originally was to protest that same-sex marriage wasn’t legalized in America, but now it’s just a celebration,” said senior and GSA board member Aubrey Maciaszek. “It’s a great experience and people seem to really enjoy it.”

The GSA charged two dollars a person and students were allowed to marry anyone or anything they wanted to. The newly-married couple received rings and marriage certificates, in addition to the ceremony carried out by a GSA officiant. Couples could choose from a variety of labels, ranging from “wives” or “husbands” to simply “friends” and everything in between.

“I got married because my friend and I wanted to become officially ‘partners-in-crime’,” senior Amanda Lowenstern said.

In addition to the marriage ceremonies, couples who had married in previous years could renew their vows in a similar ceremony.

“The first time I got married was freshman year, and this year [the people I married and I] hadn’t seen that much of each other because of applications and stuff,”  senior Ellis Spickermann said. “It just felt like the right thing to do.”