Benefits of music reach far outside the band room 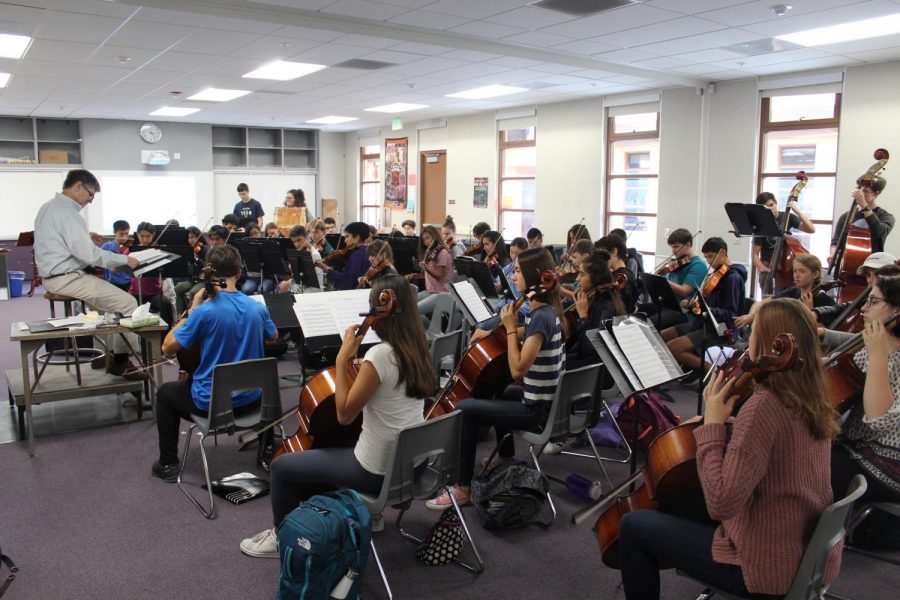 Students in Daniel Broome's seventh-period Orchestra class will apply the skills learned there to the sciences and the humanities.

It isn’t a coincidence that the violin player in your math class understood the quadratic formula before anyone else did. Recent studies from Northwestern University show student musicians are more likely to learn and perform better in school due to their musical training.

When I started sixth grade and was new to the flute in the school band, I couldn’t think about anything else except the upcoming Winter Concert. All of my focus was on practicing the songs over and over again until I could play them while spinning in circles with my eyes closed. The feelings I were left with after the concert were enough for me to know that music was my passion, and it gave me a new way to look at everyday tasks. For example, while studying for an English test the week after, I realized I could prepare the same way I had prepared for the concert, and knew I would succeed.

There are many benefits to studying music—one of the biggest ones is the way that music and other school subjects impact one another. Senior Grayson Haaga has played percussion since he was in fifth grade and is currently taking Calculus and IB English at Sequoia.

“[When] playing percussion and drums, it’s a lot about the multi-tasking going on; you’re thinking about several different aspects of music,” Haaga said. “Being able to think about several things at once is useful when you’re writing and when you are trying to think how this sentence [is] going to fit in the larger picture of this paragraph in the larger picture of this essay.’ Same thing with math: you have to think about different ways to get from point A to point B.”

Practicing and figuring out the rhythms and beats in music pieces has helped me and music students across the globe to spot number and counting patterns within math.

Every piece of music has a different count, which is essentially a different division of time. One must be able to understand and count the song’s set time to be able to play it.

“The greatest scientists are artists as well,” scientist and violinist Albert Einstein said. He would refer to his music when he was troubled by his sciences.

“Music helps him when he is thinking about his theories. He goes to his study, comes back, strikes a few chords on violin or piano, jots something down, and returns to his study,” said Einstein’s second wife Elsa to National Geographic.

Junior Marco Pretell has played the oboe since sixth grade and is now part of the Peninsula Youth Orchestra. Pretell has formulated some of his study habits through learning music.

TheHumanist.com conducted a 10-year study that tracked over 25,000 students ending in 2015 and concluded that those involved in music programs scored higher on standardized tests than those without musical education. The study showed an increase in percent from music students in the math and verbal portions of the SAT. Musical students around the world are showing a much bigger improvement because of the critical thinking, creativity and counting skills music teaches.

“The type of work you put into getting better at an instrument is the same type of work and discipline you can put into studying and breaking your work down into small parts,” Woodman said.

Now is the time to pick up an instrument because music has more of an impact on you and your life than what is seen just in the band room.