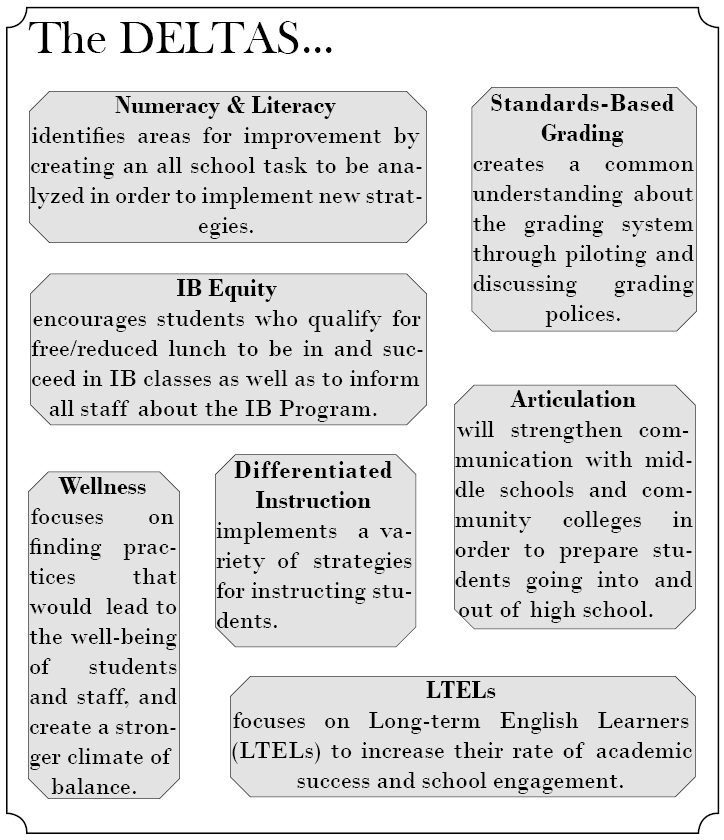 Have you been wondering why the bell rings one minute later before lunch?

This year, the schedule has changed to add one minute to every third and fourth period class. This schedule change allows for the same number of Collaboration Mondays as past years.
Early release Mondays allow staff to work in their Design for Equity in Learning and Teaching At Sequoia (DELTA) task forces, an acronym created by Principal Sean Priest, as well as various other groups. These task forces address eight areas of improvement: articulation with partner schools, Long-Term English Learners (LTELs), International Baccalaureate (IB) equity, wellness, differentiated instruction, numeracy, literacy and standards-based grading. They were created for the upcoming 2018 Western Association of Schools and Colleges (WASC) visit, which are conducted every six years.
WASC determines whether schools are preparing their students for college, and, if not, the diplomas of the graduating students are invalid.
“It’s a real variety [of staff from] around the school,” math teacher Laura Larkin said, who is a part of the IB Equity task force. “It’s not just people who were on the IB Equity leadership team … there are teachers from social studies, special education and art [departments].”
All teachers were asked to choose four DELTAS that they were interested in working on. Task forces are made up of teachers from all over the school, who work together to improve Sequoia.
Although the groups were only created this year, they’re hoping to accomplish

a variety of goals—chiefly, to inform more people about different topics.
“I definitely think change happens on a small scale because of [DELTAS],” junior Ellis Spickermann said, the Junior class student representative for Site Council. “They get presented to staff and faculty and they [make] a general school direction, [and] programs are implemented around them.”
Even though the teachers don’t have as much time as they would like, they are still able to make small changes.
“We had some goals and we realized that our goals needed to shift based on the amount of time that we actually had for planning,” math teacher Beth Peters said, working in the Articulation task force.
However, these teachers mentioned that they wished they had more time to meet than the few meetings scheduled because they feel the bigger goals will take longer than the allotted time.
“One thing is really hard when you get a group of teachers together, you have to have a clear vision and we spent a lot of time trying to figure out what that vision was,” Peters said. “So I don’t know if you would say that’s a challenge, it’s just something that we’ve had to figure out first and I think it took us longer to figure out what that vision was going to be than we expected.”
Each task force has about 15 staff members, according to history teacher Lydia Cuffman, a part of the standard-based grading task force. She also agreed that it was an unavoidable challenge for the DELTAS before you work with a staff of about 200.
“I think the DELTAS are an opportunity for teachers to make changes to things they’re excited about, that matter for them,” Cuffman said. “I really appreciate that we are being given the opportunity to chart our own course and have input, because we are the ones doing this work every single day. I feel very respected and valued that someone actually cares about [what] my day-to-day work life is like. I think it’s really cool and I’m super on board.”