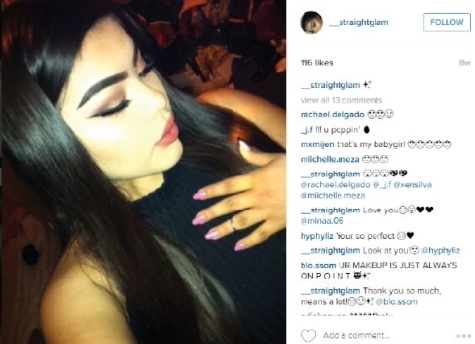 Razon has been making money with her makeup skills since last year and uses her Instagram page @__straightglam to promote her business.“Sometime around the end of my sophomore year I realized using social media was better than just hoping people would talk about my makeup,” Razon said.
With almost 800 followers, word has gotten around. Her Instagram page doubles as her personal account and as a way to market her skills to anyone interested. The page is filled with pictures of her and clients in full makeup for homecoming, formal and most recently, Valentine’s Day.
“Formal was really, really packed,” Razon said. “I had about six people that wanted me to do their makeup that day, not including a bunch of other people that needed other jobs done, so I [started] at 8 a.m. For the rest of the day I was just running around like crazy.” Razon gets the most appointments and money from Sequoia dances.

A single session costs $45, and with at least six appointments with Sequoia students the day of formal, Razon made $270 from fellow students, in addition to having other clients from other schools.

Razon owes her success to her mother and sisters.

“When I first wanted to start doing makeup on other people, I practiced a lot on my sisters,” Razon said. “I definitely would not be as good as I am now if they didn’t have patience to go through that.”

Razon also got lots of practice on her friend, junior Melina Gomez. The two hit it off after Gomez began a conversation about fashion.

“I remember asking her if I should dye my hair,” said Gomez. “She actually gave me really good advice, and I was a little bit surprised.” Gomez gets the friends-and-family discount of absolutely free for all makeup appointments. The most recent job Razon did on Gomez was for formal, and Gomez was proud of her friend.

“Everything was on point,” Gomez said. “The eyeshadow, the lips, the highlight—everything. She’s hella talented.”

Razon credits her success to passion, lots of practice and her mother’s tips.

“I remember my mom telling me to practice my winged eyeliner before bed. That way, you can just take it off messily and start over if you need to,” Razon said.
Coming to school in full makeup everyday since sophomore year has allowed Razon to be nit-picky about her makeup and how it looks.

“I don’t want come to school if my eyeliner or my eyebrows or anything like that isn’t absolutely perfect,” said Razon. “If I do come, I’ll straight up leave class and go to the bathroom until I’m satisfied.”

Razon says the best thing about makeup is the confidence it gives her and others.

“People make comments and pass judgement on people for how much makeup they wear, but those people are just the most insecure,” Razon said.

Razon knows more than anyone about the stigma surrounding girls who wear lots of makeup. With an Instagram page dedicated to makeup, she says sometimes her classmates will make passive comments about the amount of makeup she wears.

“Just because you wear it, and it makes you feel good when you’re wearing it, that doesn’t mean that you’re any less beautiful or any less deserving of respect when you’re not wearing it,” Razon said.