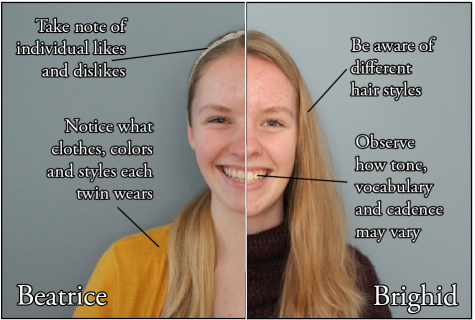 I’m Brighid. Not Beatrice, not Thing 1 or Thing 2. Just Brighid.
Beatrice and I know, like many other identical twins, that it’s a constant annoyance going through life living with two names.
Getting names wrong isn’t necessarily the annoying part: what is annoying is when people don’t try to get twins’ names correct. Especially if you’ve known them for awhile.
As a twin, I’ve learned a couple of tricks that help distinguish twin from twin, along with some information about twins.
1. A constant misconception is that identical twins are exactly, exactly alike: same clothes, same classes, same friends, any difference however minor makes us not alike. So let’s just clear this up, identical twins have the same exact DNA. No matter how different they end up looking they are still identical. And they do not have to have all the same interests.
2. All twins have heard “oh, sorry. You guys just look so alike” multiple times a day when someone calls us by the wrong name. If you’re someone who just met a pair of twins, don’t worry about it. But if you’ve known them for over a year and a half, it’s time to get on it.
3. Don’t be afraid to ask how to tell twins apart; it’s better than struggling for a longer time. If you don’t feel comfortable asking them directly, then ask one of their friends or family members; they usually have a tip to help you.
4. One of the easiest things is to observe them. Notice what they wear, who they hang out with, what their interests are, what classes they’re in and how they talk. It will come with time, but you can learn more about them.
5. If they are similar in those ways like Beatrice and I, then turn to more permanent physical attributes like haircuts, birthmarks, freckles and height.
6. The worst thing you could do is to give up and stop trying. It’s better to keep guessing and get it wrong then not to try at all. At least with guessing you have a 50/50 chance.
7. As a twin, many times the best thing you can do when someone calls you the wrong name is to correct them politely and tell them a way to tell you apart. It may be something that they’re uncomfortable to ask, so point out obvious, permanent attributes that define you two as unique beings.
8. Remember that it takes time to learn things, some people more than others. Just be patient.
But do yourself and the twins around you a favor: learn their names. If you aren’t part of the 0.2 percent of the population that is a twin, give twins the respect they deserve and treat them like the individual human beings they are.